Home / Technology / A Clear View of the Road Ahead

A Clear View of the Road Ahead

Sometimes innovation is doing something new with what already exists. That is what Samsung is doing in Argentina – and hopefully saving lives in the process.

On February 2, 2016 Samsung Electronics announced the official launch of their first ‘Safety Truck’ on the roads of Argentina. This prototype semi-trailer truck uses built-in cameras on the front of the truck  and special software to send pictures of the road ahead to a video wall mounted on the back of the truck. The video wall is made up of four high-quality dust-proof and water-proof Samsung video displays. For drivers trailing behind the truck it is as if you are look right through the truck – making the decision to pass or not pass a much safer and informed choice.

For everyone who has ever been stuck driving behind a semi-truck or even a large SUV, the concept is brilliant and welcome. Even more important than the convenience though is the hope that it will save lives. The World Health Organization (WHO) estimates the total number of road traffic deaths worldwide at an unacceptably high 1.24 million per year and projects that number could triple to 3.6 million per year by 2030. A sobering statistic.

Kudos to Samsung for this innovative new use of their products. The prototype Safety Truck will be on the road for one year. Let’s hope it proves effective in making driving safer and more convenient for everyone.

And finally, here is a challenge for all of us. Look around. Is there some existing technology or process that could be re-purposed to make life better? Maybe you’ll be the one to come up with the next great idea.

Connect With an Expert 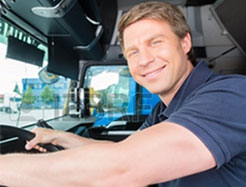